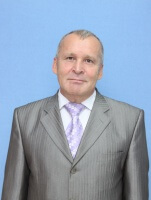 Anatoliy Prokopievich graduated from Perm State University (1969 – 1974), then finished post-graduate courses of Moscow State Pedagogical University (1976 – 1979). He was a student of academician Dmitriy Nickolaevich Shmelev. In 1979 he defended a thesis on the subject «Lexis of Existence in the Modern Russian Language» and became a candidate of Philological Sciences.

Since 1982 A.Ch. has been working at Ural State Pedagogical University. In 1985 he became an assistant professor. In 1990 he passed his Ph.D. defense on the subject «Regular Semantic Variation in Russian Verbal Lexis».

In 1991 A.Ch. was awarded a professor rank and became Head of Chair of the Russian Language and Its Teaching Methodology. Later on, he has been holding a Chair of Rhetoric and Intercultural Communication.

Anatoliy Prokopievich Chudinov presides a Thesis Board on the specialities 10.02.01 (the Russian Language) and 10.02.20 (Comparative Linguistics, Linguistic Typology and Contrastive Linguistics). More than 80 candidate and Ph.D. theses have been defended under his guidance.

His interests include such fields of science as political linguistics, advertisement language, cognitive linguistics, intercultural communication, rhetoric and elocution, lingvodidactics. He is Chief Editor of “Political Linguistics” magazine. A. Ch. authors 18 books and over 300 other publications. His manuals “Political Linguistics” (translated into Chinese) and “The Basics of Communication Theory” are used in the universities of different Russian regions, in Poland, Hungary, Slovakia, China, Bulgaria, Ukraine, Lithuania, Belarus, and Kazakhstan.

Since 2005 Anatoliy Chudinov has been the Pro-rector for Research and Innovation at Ural State Pedagogical University.