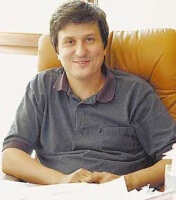 Kontsevich Maxim Lvovich is a French mathematician of Russian origin, winner of the Phields Medal for proving Witten’s conjecture that two quantum gravitational models are equivalent and for finding the best (for the moment) knot invariant with the help of an integral created by him in 1993 and later named after Kontsevich. Maxim is a son of a noted Soviet orientalist Lev Rafailovich Kontsevich. He attended Vladimir Mironovich Sapozhnikov’s mathematical class at school № 91, Moscow. He graduated from the Mechanics and Mathematics Department of Moscow State University in 1985 and, after several years’ work at the Institute for Problems of Information Transmission, he received his Ph.D. at the Among Kontsevich’s successful research areas is also the knot theory, closely connected with attempts to combine the superstring theory with a theory of general relativity. In particular, Kontsevich managed to present all Vassiliev invariants by way of a (good) multiplicative integral and to compute the so-called universal Vassiliev invariant. Maxim Kontsevich is also well-known for his critical papers on deformation quantization of Poisson manifolds and homological mirror symmetry. Maxim Kontsevich turned out to be the youngest student of his course, as he had “skipped” one grade in the secondary school. By his annual victories at the All-Union Mathematical Olympiads, Kontsevich gained an admission for the International Olympiad of 1980 – the only year when the International Olympiad was omitted. While his mates on the third course studied the use of Minkowski’s four-dimensional space for special theory of relativity, Maxim was working on an article on 26-dimensional space for superstring theory. There are very few mathematicians who deserved the right to give their name to an integral. Maxim Kontsevich, an author of Kontsevich integral, is among such celebrities as Riemann, Lebesgue, Stieltjes, and Gauss. In 2000 the American Mathematical Society decided to hold a historical conference like the II Congress of Mathematicians of 1900, at which the famous problems of Hilbert were presented. Maxim Kontsevich was the first to be invited to the conference “The Mathematical Challenges of the 21st Century”, among 30 top world mathematicians. In 2011 the Forbes magazine published the list of 50 Russians who “conquered the world”. It consisted of scientists, men of business, artists and sportsmen who managed to integrate into the world community and achieved international success. M. Kontsevich was ranked among 10 best-known scientists of Russian origin.